This research demonstrates that although manufacturers offer firmware updates to enhance security for legacy products (in this case, through encryption), the limitations of legacy products may prevent them from achieving the level of security of current models that are designed to support the latest security functionality.

A few quick Google searches didn’t turn up much public security research on the FlexiDome 7000, so I downloaded the current firmware image file. I then unpacked it and attempted to do some reverse engineering and subsequently some bug hunting. However, I soon discovered that the firmware file I had downloaded contained encrypted data.

This statement led me to believe that I might be able to unpack a version prior to 6.50. To test this assumption, I downloaded several prior versions and began trying to reverse engineer the file format and obtain its contents.

I started with a sample firmware file prior to version 6.50, which I downloaded from the Bosch website 3EXTEGRA IP 9000  Firmware Maintenance Release Download (https://downloadstore.boschsecurity.com/FILES/CPP4_H.264_6.32.0124_EXTEGRA_only.fw) This is a maintenance release of firmware for the EXTEGRA IP 9000 camera.  I loaded the file into a hex editor to begin working on it. This file was an unencrypted example.

My initial process was to try to figure out the basic structure of the file. Essentially, I wanted to learn:

To explore these questions, I wanted to break the file down into metadata and actual firmware data. Before we discuss that, it helps to understand that many file formats such as ZIP, Windows PE, and others have structural features in common.

Many file formats use one or more “magic numbers,” a constant numerical or text value used to identify the file as belonging to a certain format. For example, ZIP files generally start with PK\x03\x04 as an identifier. Magic numbers give a file parser a quick way to test the file before performing more intensive parsing.

Other common fields can help a parser identify the contents and where in the file they are located. In a binary file or archive, these include length, one or more checksums, and other metadata.

When reverse engineering an unknown file format, it helps to consider the type of data a file is expected to contain. Many firmware file formats contain either separate files (i.e. an archive) or data segments that are directly written into the nonvolatile storage on a device.

At first glance, I found that this firmware file was broken into what appeared to be sections. The first 1-2KB of data in a hex editor revealed a sparse set of values, followed by a large, seemingly random segment. The very first value (10 12 20 03) in the firmware was found in a handful of locations in the file, always at the start and the end of a 1024-byte long section. Each of these “sections” was followed by what appeared to be binary data. Shown below is the first 64 bytes of the 1024-byte header.

First came the magic number for what I assumed were header sections. A handful of other values stood out, all 32-bit values:

These are all big endian values, which means the most significant byte (or “big end”) is placed at the byte with the lowest address. In my experience, most binary file formats are designed with a single endianness in mind, and figuring out which is in use becomes clear as different fields (e.g. length) are found in the file format.

This was already enough information to write a few lines of Python code and break up the file into sections, each with its own headers and data.

Data segments in this file appeared to be random / encrypted, but were they? A good first check is to use a tool that can perform entropy measurement, such as binwalk. The output of binwalk on the data following a file header in this file looks like:

Another several dozen lines follow. The data clearly isn’t random, so some form of obfuscation is likely. Encrypted data would have an entropy of >0.99 when seen by Binwalk's entropy analysis. Since the documentation I found (and listed at the beginning of this post) pointed to encryption only being used on later versions, logic dictated that some other form of obfuscation was in play.

My assumption here was that the contents of this section were one or several files, presumably containing binary data and executable code. Therefore, when looking at this form of data in a hex editor, I expected to see segments of data separated with padding. Usually, an executable image will space out sections with padding made of zero (\x00) bytes. Looking at the header again, there are long runs of a single character throughout the data, such as:

After a bit of thinking, my first guess was that those should be padding or zero bytes, and that the image was XOR-encoded. A few lines of quick Python scripting to examine the XOR obfuscation resulted in data looking like:

Clearly this was some form of file header, followed by a file name and additional metadata. I confirmed that I had usable file contents by running binwalk on the resulting data section.

The above work resulted in a set of firmware images and various static files served by the device’s web server. From reviewing the Bosch documentation, I knew that there should be a firmware version that is both obfuscated and supports encryption. However, Bosch has been rather diligent when it comes to culling old firmware download links from their website. Nearly every 6.50 link I could find was either slightly too new (and therefore encrypted) or slightly too old (offering no encryption support).

I did, however, find the file I needed through a single working link on an Italian blog post 4Italian blog post with link to legacy Bosch firmware: Testing a Bosch IP Camera (DINION IP 5000i IR) (https://enzocontini.blog/2018/06/02/testing-a-bosch-ipcamera-dinion-ip-5000i-ir/).

The link took me to a download for a maintenance release for CPP7.3-based cameras 5CPP7.3-Based Camera Firmware Download (https://downloadstore.boschsecurity.com/FILES/CPP7.3_FW_6.50.0133.fw). This file is not listed on the Cameras and Encoders page, Firmware tab 6Bosch Download Area: Library of Current Firmware (https://downloadstore.boschsecurity.com/index.php).

The main runtime for these devices is contained within a file named app1_rel in the archive, and the code is very well annotated with logging statements and other data which helped me find a place to start reversing. 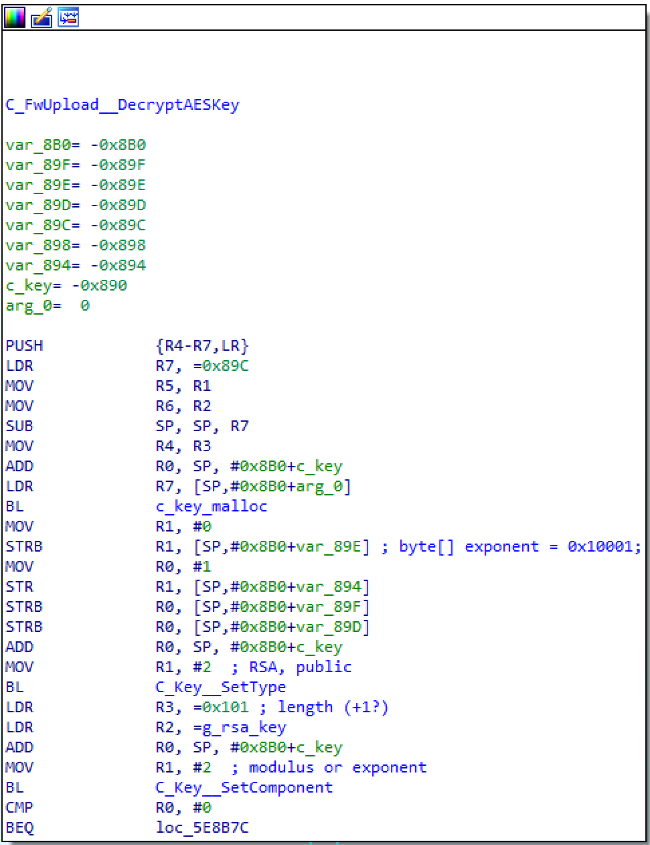 Found in the main firmware upload handling function, the above function:

A second call to SetComponent is used to set the public exponent to the commonly-used value 0x10001. In this code, the g_rsa_key buffer contains the n component of the RSA public key, and the e component is set in a stack allocated buffer. Both buffers are loaded into a form of arbitrary precision integer structure inside of SetComponent.

At this point, I encountered a minor complication: The algorithm used RSA public key decryption to decrypt an AES key from the firmware file, which I discovered while reverse engineering the application firmware. Generally, cryptography libraries do not expose an API for performing public key decryption, but I knew from prior experience that OpenSSL does. Therefore, I wrote a short C program using OpenSSL to expose the API and confirm that I could decrypt the AES key (and then the binary).  This decryption is not necessarily a security flaw in that the assumption is that the value of a public key is public or known. However, being able to alter the public key would be a flaw.

One open question remained: Where is the AES key located in the firmware? Bosch used formerly empty space in the headers to store 256 bytes of additional data. This is followed by encrypted data. Using the aforementioned C program, I attempted to decrypt a section and got:

The layout is relatively simple here:

Using the above key and AES IV, I was able to successfully decrypt the data in that section using AES-256-CBC decryption. That said, simply having access to the AES key is not enough to modify or create new valid firmware files unless we also have the certificate used to validate the signature. The CPP7.3-based firmware appears to also have a signature in the header, and initial reversing of the firmware confirmed code related to those checks. I have not found the exact certificate being used to validate the signatures.

As part of this blog post, we at Anvil Ventures have also open sourced a tool capable of unpacking both pre- and post-6.50 firmware versions. It also automatically unpacks “RomFS” contents, which are essentially archives of the files that the device serves from its web server. We hope that anyone interested in doing additional research on Bosch’s camera line will find the tool useful.

Source and precompiled binaries are available at: https://github.com/anvilsecure/BoschFirmwareTool

Several lessons can be taken from attempting to add security features to existing products in this manner:

James Thomas is a Principal Security Engineer at Anvil who is focused on embedded systems and application security. A security consultant in recent years, James was previously a security researcher at the Idaho National Laboratory where he performed penetration testing on a variety of Industrial Control Systems and Critical Infrastructure-related systems and also designed tools to protect against his successful attacks. This is the first of several posts on James’ research and side projects.

awstracer - An Anvil CLI utility that will allow you to trace and replay AWS commands.

nanopb-decompiler - Our nanopb-decompiler is an IDA python script that can recreate .proto files from binaries compiled with 0.3.x, and 0.4.x versions of nanopb. See the introductory blogpost

ulexecve - A tool to execute ELF binaries on Linux directly from userland. See the introductory blogpost